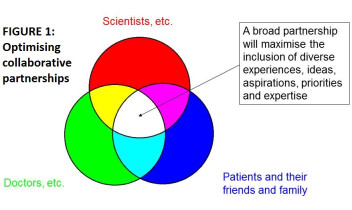 Sharing my enthusiasm for patient involvement

While carrying out a short internship in promoting patient and public involvement and engagement for the Faculty of Medicine and Health at the University of Leeds, I was invited to talk about my experience of using the EPAP online training package.

I have been involved in patient involvement activities since 2007 and I was excited by the opportunity to share my enthusiasm for meaningful patient involvement with some new people. I agreed to plan and run the EPAP taster sessions with Kate Hill, who first pointed me in the direction of EPAP. After using it myself, I quickly came to the conclusion that it could be extremely useful to many people who are already involved in health and research, or who are thinking about doing so.

We gave several talks to both service users with little or no experience of patient involvement, and groups with a mix of healthcare professionals, experienced patient-public contributors and those who had begun their involvement activities only recently.

It was particularly satisfying to have the opportunity to speak to such a wide ranging audience, including many professionals who gave positive comments about how the courses could help the groups that they facilitate (especially as a way of welcoming new members). The sessions definitely demonstrated the value of EPAP as a useful tool for anyone currently involved or interested in becoming a patient ambassador in the future.

One question which came up at the sessions was whether calling the programme the ‘European’ Patient Ambassador Programme might put some people off whose passion is to improve healthcare in their local community. We explained that ‘European’ had been included because it was designed to be used by as many people as possible throughout Europe, and although originally produced in English it has subsequently been translated in French, Dutch, Italian and German.

Why is collaboration important?

I believe that bringing patients and the public together with medical professionals is the best way to achieve improvements in healthcare which are genuinely practical and most relevant to service users and carers (see Figure 1, which was adapted, with permission, from an original idea by Jim Elliott @Drakesyard). This can either be through helping scientists choose the right projects or helping doctors and nurses to understand the real life experiences when living with a condition.

As Figure 1 shows, including as many different types of people as equal partners in patient and public involvement gives the best results - just like how all of the colours of the rainbow add up to give bright, white light.

I also believe that one of the most important aspects in achieving good involvement is to help patient and public contributors gain the skills and confidence needed to enable them to take part in joint activities with professionals. As EPAP is free to use, this removes some of the financial barriers which might stop potential users from accessing it. The programme is free thanks to the initial and ongoing support of the European Lung Foundation, the European Respiratory Society and the UK’s National Institute of Health Research.

The value of taster sessions

We asked attendees at each taster session for feedback and most people said that they felt either ‘somewhat’ or ‘very’ inspired to get involved after having heard the talk. It was also pleasing to find out that the EPAP courses were a lot less specific, or “technical”, than other courses that people had done in the past.

The sessions demonstrated the importance of reaching out to people to spread the word about patient and public involvement.  They also highlighted the need to support public contributors by helping them to gain the skills and confidence they need to be comfortable and fulfilled in their activities. The sessions definitely demonstrated the value of EPAP as a useful tool for anyone currently involved or interested in becoming a patient ambassador in the future.

Dave Manton is a former cancer patient, having had non-Hodgkin lymphoma in 2001 and 2002. He is also a former cancer researcher, having investigated how advanced magnetic resonance imaging (MRI) techniques can improve the diagnosis of cancer at the University of Hull between 1992 and 2011. He has been an active member of the UK’s patient and public involvement community since 2007. You can follow him on Twitter: @ppi_dave.

Kate Hill is an applied health researcher and a passionate advocate of patient and public involvement in research and care. She is a trustee of a Mesothelioma research charity and a Wellbeing Centre charity. She has been a member of the ELF Patient Advisory Committee (PAC) since its inception in 2011, and was elected to the ELF Council in September 2017 as the PAC representative.