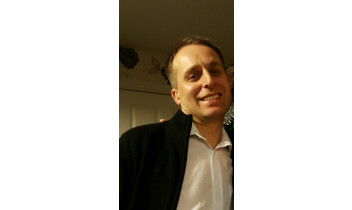 How do people get started in patient involvement?

We have interviewed Daniel Russell, one of our recent patient ambassadors to find out, what got him involved.

How did your involvement as a patient representative begin?

It was towards the end of the year 2012 and I remember my asthma at the time was not very well controlled and I was under the asthma clinic.  I was having recurring chest infections which were impacting on my asthma.  I had endless test after test, lung function tests, an allergy skin prick test and got seen by various consultants but never fully got to the bottom of it. On one of my visits to the asthma clinic there was a poster on the wall asking for volunteers for the ‘UBIOPRED (Unbiased BIOmarkers in PREDiction of respiratory disease outcomes) study’. I enquired whether I would be able to participate and found out more about the study.  Within weeks I was enrolled on the study and I was part of it for a year finding out so much about my asthma, my lung capacity and state of my lungs.  First time I had done lung function tests, spirometry, had a CT scan of my chest and bronchoscopy.

What happened after your involvement in the study finished? Did you take part in other projects?

It was on completion of my participation in the study that I was interested in becoming more involved. So, in May 2014 I contacted Asthma UK, my national asthma organisation, about becoming a Research and Policy Volunteer.  I quickly became involved in a few research studies, and I gave feedback via email and the internet on some of the studies. This then led on to me joining further PPI (Patient & Public Involvement) groups, one on grant applications and another one at Southampton University Hospital.

How busy has it been for you since then?

Very busy to be honest. Being involved in the different studies and PPI groups led to further involvement, for instance with the Wellcome Trust, and I have applied to be part of myAirCoach, a European research project. There are many more I could mention, but the list would be too long – and all this in only 4 years. I am a patient ambassador with EPAP and also a Patient Research Ambassador with the NIHR in the UK.

What advice would you give patient ambassadors, who would like to get involved in projects, such as you have mentioned?

I think it’s important to be able to influence clinical research, and it’s great that I have the opportunity to do this where I live. You get to interact with senior researchers and clinicians, but most importantly, I feel my views and opinions are both listened to and welcomed by all those involved in PPI. If someone is thinking of getting involved, I’d say “do it”. As well as having a voice and playing a part in the direction of research, you find out so many new things and hear about ideas and studies that could make a huge difference to people’s daily lives and quality of life.