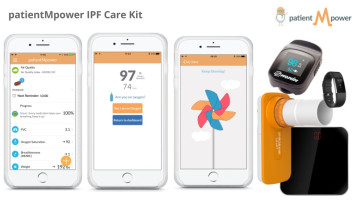 App for people with all forms of Pulmonary Fibrosis

patientMpower, (a company in Dublin, Ireland) have developed an electronic health diary (“an app”) that can be used by people with idiopathic pulmonary fibrosis (IPF) and pulmonary fibrosis (PF) to help them keep a track of their symptoms and lung health.

Colin Edwards and Eamonn Costello from patientMpower came to the Irish Lung Fibrosis Association (ILFA) Dublin Support Group meeting in August 2016 to explain about the app and sought volunteers from the group to try it out and give feedback/suggest improvements on it.

I am a member of the Dublin Support Group and am a patient with IPF (I was diagnosed with idiopathic pulmonary fibrosis in 2010) and I volunteered to try it out along with some other patients in the support group. I agreed to try it out for approximately a month or two and found it so helpful that I have continued to use it ever since.

The app is relatively easy to use and works on any tablet device (such as an iPad) or any Smartphone. For example, the app can be very useful for recording levels of breathlessness, the number of steps walked per day, a reminder to take medicines every day, record oxygen levels and breathing tests results by use of a hand held spirometer.

The spirometer was supplied free of charge from patientMpower and records the FVC (Forced Vital Capacity) by blowing into it and having it close to the Smartphone. The great advantage of recording the FVC on a regular basis is that it can be very useful to obtain objective results over a period of time rather than having to wait maybe six months for a breathing test before seeing a consultant. It also provides an option to record a Journal Entry which can be used for example to record hospital appointments, symptoms such as, rash, nausea as well as diet details and vaccine dates. I found this to be of benefit when attending my respiratory consultant in October 2017 because the information was printed out and I used it to highlight health issues that I was concerned about.

It is worth pointing out, the feedback on the use of the app was very positive from the respiratory clinic, my GP and from other people using that app. PatientMpower deserve credit for actively listening to patients with pulmonary fibrosis, taking patient feedback on board and continuing to improve the app in order to help maximize the benefits to patients using it. Any development of this kind is a very positive step as it helps to empower patients to better manage their health condition.

A pilot study to test the utility and acceptability of an electronic health record (patientMpower) for patients with lung fibrosis was presented at the Connected Health conference in Boston. Another poster entitled: “A longitudinal approach to supported self-management: sustainability of the idiopathic interstitial pneumonia electronic health journal (patientMpower) with integrated home spirometry was presented at the Irish Thoracic Society in Limerick in November 2017.

And hot off the press, news has reached us that patientMpower were one of three winners in the IPF Catalyst Challenge in Chicago awards. Nine finalists pitched their innovative and inspired ideas to help patients living with IPF to a panel of judges. Great news for both patientMpower and very encouraging news for patients that use the App.