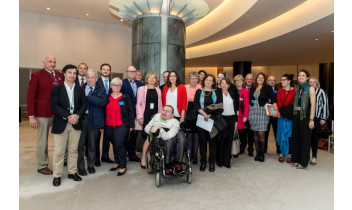 "The EU Parliament meeting helped personalise Alpha-1 among MEPs. Developing these relationships will pave the way for future discussions both on a European and national level, which we believe will result in better care and access to treatment for Alpha-1 patients in respective countries."
Gonny Gutierrez (Alpha-1 Global Director)

The roundtable discussion presented an opportunity for European Alpha-1 patient organisations and MEPs to discuss the challenges of Alpha-1 patients in the individual EU Member States. Presentations were given by Alpha-1 leaders from Poland, Spain, Italy, the Netherlands, Belgium, Romania, and the UK, to create a clear image of the burden and difficulties of the Alpha-1 condition. They also included specific policy asks for their countries.

Alpha-1 is a rare genetic disorder that increases the risk of lung, liver and other diseases and present worldwide, but the prevalence of its severe forms varies across Europe, affecting about 1 in 1,500 to 3,500 individuals, whereas mild forms are most common.

The principle difficulty in managing Alpha-1 is achieving early diagnosis, something that most patients will not receive until severe symptoms have begun, despite the inexpensive and effective means of diagnosis that exist. Alpha-1 can be a life-threatening disease, and without proper treatment and care patients may have a decreased life expectancy. 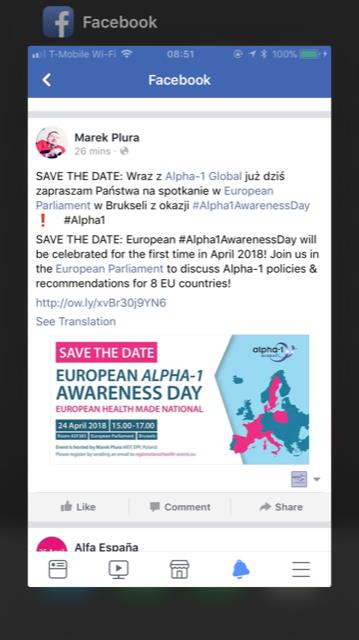 Participants noted the importance of hearing from rare disease patients in the European Parliament. MEP José Inácio Faria (EPP, Portugal) stressed the crucial position of patients sharing their specific needs and challenges with European politicians. As the shadow rapporteur of the European Parliament Own-Initiative Report on EU Options for Improving Access to Medicines, Mr. Faria congratulated the Alpha-1 community on their first EU Alpha-1 Awareness Day and expressed his willingness to continue meeting patients during such crucial events, which can build a strong basis for political engagement with the European Parliament. Close political relationships are a corner stone in improving the quality of life of rare disease patients throughout Europe.

In support of the first EU Alpha-1 Awareness Day, on Wednesday 25 april, specialists and patient representatives met to discuss how to share best practices in the care of Alpha-1. The roundtable was moderated by Gonny Gutierrez, Director of Alpha-1 Global; with an active participation from the Alpha-1 patient community across Europe, Alpha-1 experts, as well as EU organisations representing the liver and COPD communities. The meeting set two main objectives: facilitating the dialogue between experts and patient representatives and encouraging collaborations between stakeholders at EU and national levels.