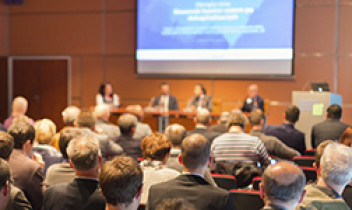 This is what we asked some of the patient speakers at the recent ERS International congress. There were 16 patient speakers and demonstrators who participated in the many scientific and educational sessions at the Congress, attended by over 23,000 scientists in an enormous congress centre – a pretty scary thought, even for seasoned speakers. Two patient speakers – Truus Teunissen and Betty Frankemölle from the Netherlands – have agreed to contribute to this article about their experience.

Both Truus and Betty were already interested in patient involvement, either through their work or through their patient organisation. Betty had been asked by Longfonds (the Dutch Lung Foundation) whether she would like to speak at Congress and she was not sure to begin with, as she was worried that her English might not be good enough. Still, having been a volunteer for Longfonds for many years, as well as having been a nurse, Betty decided to take the plunge and give it a go.

All patient speakers were sent an ELF handbook with details of the different sessions, who was who at Congress and practicalities. Truus and some of the other patient speakers had also completed the European Patient Ambassador Programme (EPAP) and especially the new module on “Participating in healthcare conferences”.  And yet, there was still a lot of uncertainty of what it would actually be like and what to expect on the day.

Both Betty and Truus liked the fact they were given a guide for the day – this was a healthcare professional, also attending Congress, who contacted them beforehand to introduce themselves, offered help with putting together the slides for their PowerPoint presentations and helped on the day, taking them to their sessions and introducing them to the session chairs (the people who run the session). They found their guides very helpful and reassuring, especially since they were Dutch as well and could help with any language issues.

Truus found the number of people at the congress centre rather intimidating at first and she felt a little insecure speaking in front of a lot of other people in a different language. But she also enjoyed this very much and being able to do this successfully was the highlight of her congress attendance.

Betty sums it up well: “It did very much for my personal development and confidence in myself. Now I know I have to tell something and I am able to tell it.”